“If you become part of the suffering, you’d be entirely lost.”

These poignant words, taken from perhaps the most famous diary of the 20th Century, have been set to music by James Whitbourn as part of his oratorio Annelies, which will be performed by the Chelmsford Singers (Musical Director James Davy) on Saturday 28 March in Chelmsford Cathedral.

Taking Anne’s own words (later published as The Diary of a Young Girl) as its starting point, the libretto paints a moving musical picture of the family’s life in hiding up to the point of their discovery and capture.
By turns dramatic and mundane, cheerful, thoughtful and fearful, Anne’s words reach out from their confined origins to touch the heart, especially in this effective musical setting. There will be a chance to hear from composer James Whitbourn in a pre-concert talk at 6.45 pm.

The concert will also feature excerpts from Olivier Messiaen’s Quartet for the End of Time, and Richard Tanner’s Prayer for Peace. It marks seventy years since the end of WWII and the death of Anne and her sister Margot in the Bergen-Belsen concentration camp in March 1945.

On Friday 27th March at 2 pm, Mala Tribich, a Holocaust survivor, will be speaking at a public event to tie in with the concert. Lasting about one hour, the talk will be followed by an opportunity to ask questions. Admission to the talk will be free & the chance to hear from someone who underwent many of the same experiences as Anne Frank should not be missed. 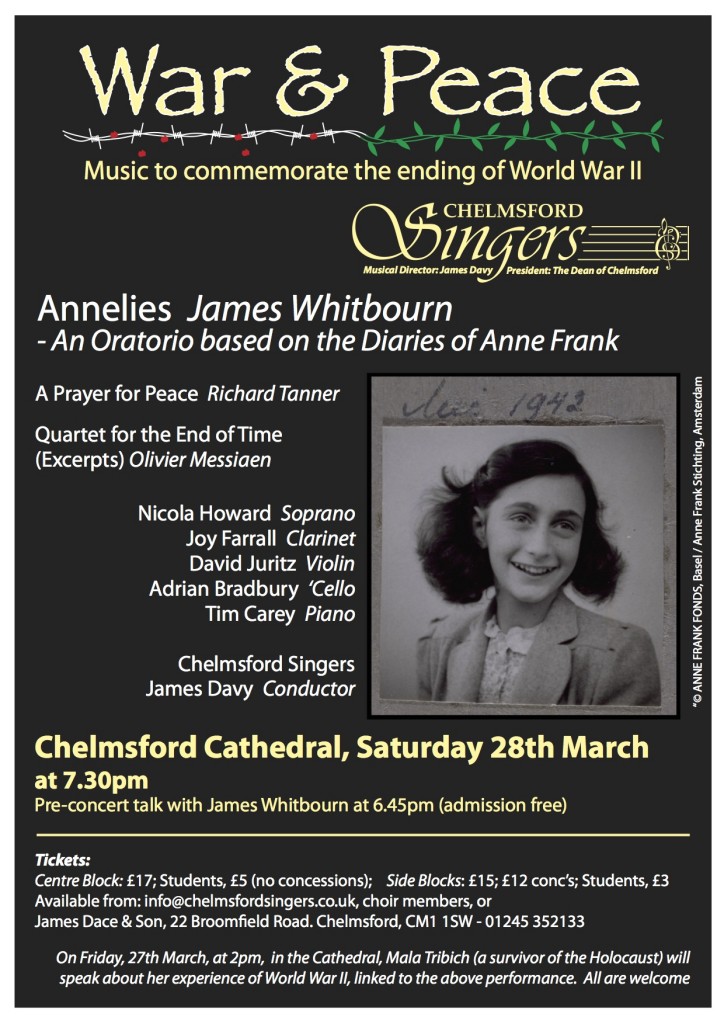 Want to hear about about our future concerts and events?

Theme by Anders Norén — Up ↑